Family & Chronik of the farm

A deep sense for traditions and for the land we live upon.

For generations farm people in South Tyrol have been named after the name of their farmhouse.

Our family has reached its third generation. Our family tree presents the oldest generation of farmers at the top, Grandmother Moidl and Grandfather Sepp, and the younger generations at the bottom – ourselves; Erich and Inge, with our children Gabriel and Florian.

We care for our guests, a pleasant stay in our farmhouse means so very much to us. Relaxation is a natural add-on guaranteed as it is by our beautiful landscape, the freshness of the air and the blue hue of our sunny skies. 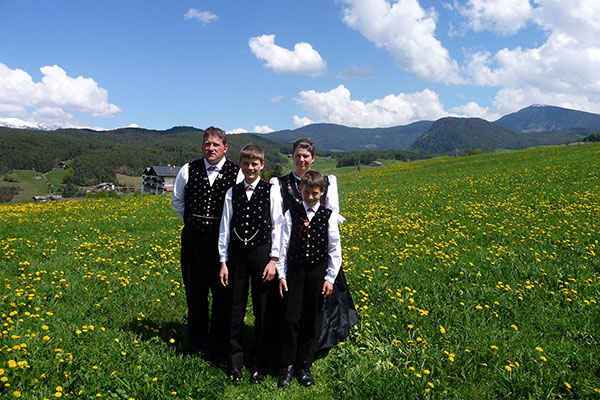 You are welcome to take a tour of our farmyard.

And don’t forget! Your kids might be glad to give some help in the stable.

Anyone interested in the culinary art is invited to our personal preparation of the typical dumplings (Knödel).

Chronik of the farm

Our farm is first mentioned in 1394. It was named “Gut zum Wegmacher” (estate of the roadmaker) and consisted of dwelling, barn, stabling, herbs and vegetables garden, small pig’s yard, small cabbagefield, field and meadows, wood in Pint near the Hauensteiner Wood, and a meadow on the Puflatsch. In 1983 the Wegmacherhof in Kastelruth was declared Hereditary Farm by official decree. This decoration was given to the farm because it has been owned by the family Gabloner for more than 200 years.

During the war the old farmhouse, built in 1618, was also used as the residence of the German armed forces. The flag was stationed on the farm. At that time the great-grand father Luigi Gabloner was the farmer. He was running the farm together with his wife Maria Rier. They had three children who owned and ran the farm as a community of joint heirs from 1945 to 1950. In 1950 grandpa Luis took over the farm. He and his wife Anna and their children had already lived at the Rosslaufhof during the war. On the Wegmacherhof the Pinzgau Race was breeded and they kept pigs and chicken, too. And there was a horse in the stable. The horse was very important to cultivate the fields, to bring in the hay and to pull home the wood from the forest. Farmgirls and farmhands who lived on the farm did all the daily work in the house and on the field. At harvest time cutter women helped to bring in the corn. At that time grandpa Luis was self sufficient.He took his milk to the dairy daily and at the end of the month he got some small money and fresh cheese. Today our milk is collected by the milk cooperative “Mila” and is taken to Bozen where it is refined or sold as fresh milk.
In 1967 Opa Luis handed the farm over to his son Josef. Josef Gabloner married Maria Schweiggl. They have three children, Erich, Cornelia and Karl. As the years went by they built a small skihut not far from the “Gunslift”. Today it’s called the “Liftstüberl”. It was finally taken over by Karl who is still running the restaurant together with his family. We, Erich und Inge, have been married since 1994 and we live on the Wegmacherhof with our two sons Gabriel and Florian. We are running the farm together with Erich’s parents.
In December 2006 Erich took over the farm from his father. In 2010 he realized another project. The 392 years the old farmhouse had to be pulled down, nostalgically. But it was rebuilt new with energy concerned modern comfort and we were very concered about maintaining the traditional style and traditions.